White-spoted rabbitfish (Siganus canaliculatus Park 1797) or serpik (Sasak) are very popular with the community as consumption fish. The condition of resources is very worrying along with the shrinking area of ​​seagrass ecosystems as a habitat for white-spoted rabbitfish. The purpose of this study is the eligibility of parent candidate of white-spotted rabbitfish. The study was conducted from 1 June to 31 July 2018 in Serewe Bay, south of Lombok Island. Data were collected using a survey-descriptive-independent method with sampling, observation, documentation, and dialogue techniques. Data consists of primary and secondary, quantitative and qualitative data groups, as well as numeric and logarithmic. Biologically, white-spotted rabbitfish from Serewe Bay has a thin body (minor allometric) and slightly flat (not fleshy). The biological status indicates that the gonads do not yet contain eggs and sex cells, so they are not eligible to be candidates for parent. However, the level of maturation is quite high where almost all of the fish samples observed are worth catching, which means the fish have passed the length of the first time the gonads mature (maturation). To get a decent and productive white-spotted rabbitfish parent, it is recommended to catch the prospective parent after the mating season ends.

This work is licensed under a Creative Commons Attribution 4.0 International License. 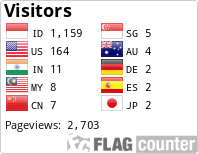 This work is licensed under a Lisensi Creative Commons Atribusi 4.0 Internasional.